We try to measure so many things, but we are aware that measuring things in academia can incentivize perverse behavior and lead to weird side-effects. So, I’ve decided to measure something that isn’t commonly cared about in education and I’m hoping that measuring this objective and incentivizing its maximization will lead to a (non-perverse) side-effect of happier students and increased learning.

When I first revamped our CS1 course and turned it into a fully-flipped, active learning, lightweight teams version of Guzdial & Ericson’s Media Computation course, I noticed a huge difference in the community atmosphere inside the classroom. The team-based approach works really well, especially in that first year when students are really trying hard to make friends and fit in. After observing this in the first semester of the course, I decided that I wanted to start measuring it, and so in the anonymous final course feedback in subsequent semesters, I asked the following question:

The first few terms this class was taught, we created lightweight teams with 5 people per team. In subsequent semesters that number has varied, based on classroom setup, but it has always been between 4 and 9 in our flipped classes.

Here are the results from the first term we collected this data in 2013:

What you are seeing here is that more than 60% of students in the class reported making 5 or more new friends. This, to me, is critical. It means students feel accepted, normal, part of the group. It means that when they get to harder courses, they have a support network. I expect it increases their likelihood to graduate.

In later courses where I adapted the same model and in later sections of that same intro course, we had different classrooms with different layouts that led to some larger team sizes. In my flipped, team-based Data Structures course, I’ve sometimes had students at tables of 9, though split into two teams of four and five, but often really working together as a larger team. Thus, I changed the friends question to be more granular. The graphs below represent ‘friends’ data over three semesters of the flipped Data Structures course. 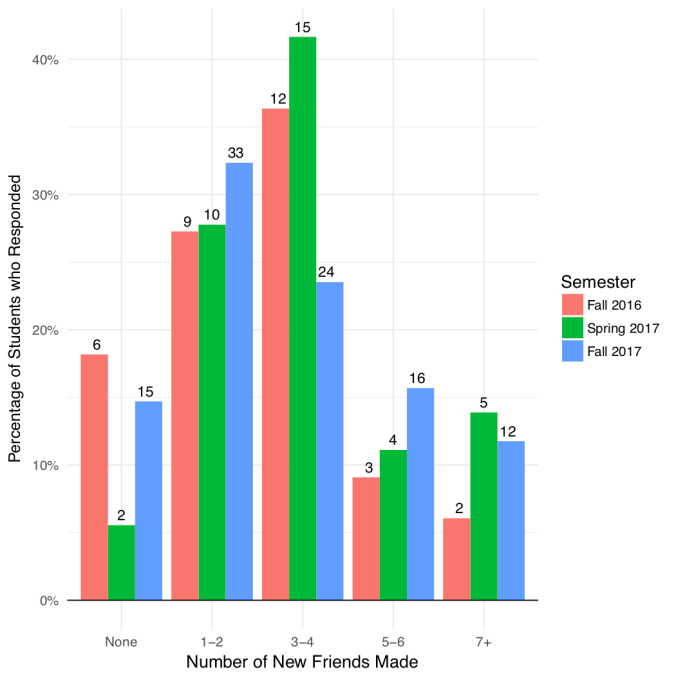 We can also look at this by sex. The following graph averages over the three semesters of the class. 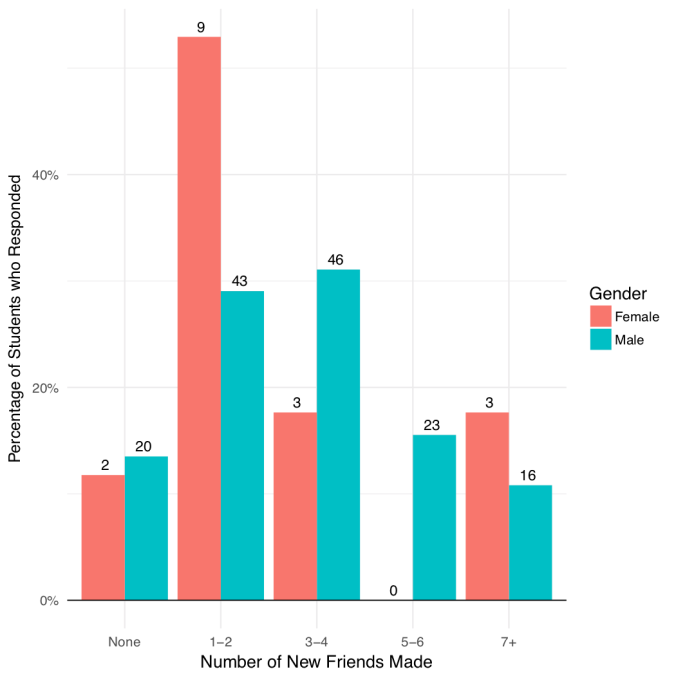 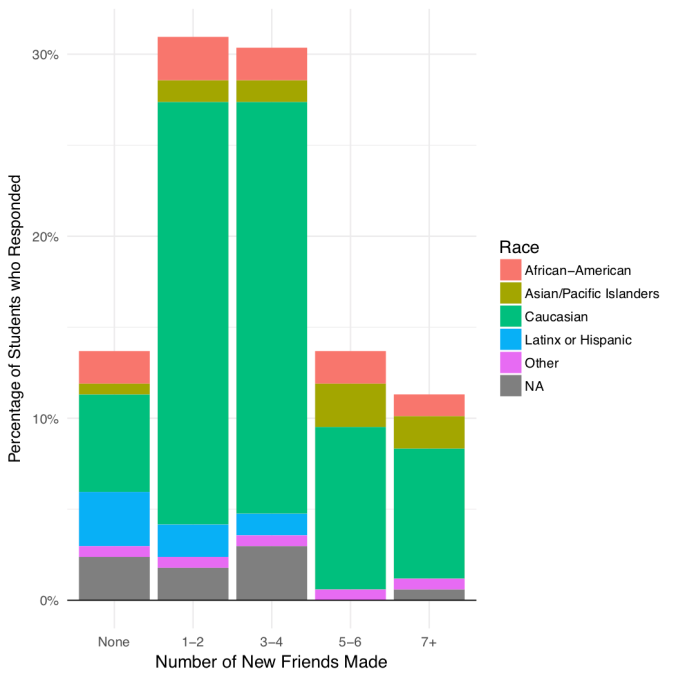 This graph, which looks at students by race over the three semesters, is tricky. First of all, it completely ignores intersectionality. And, the categories of ‘N/A’ and ‘other’ are hard to parse. What I do see here is that African-American students do seem to be making friends in class, at similar rates to Asian and white students, but Latinx students are not making as many friends. This is troubling. If my Lightweight Teams approach is helping most students make friends and feel supported, but not Latinx students, I want to know what is going on. I don’t have an answer here, but because I collected the data, at least I can ask the question.

The ‘friends’ question has been adopted into the final course feedback surveys used by a number of faculty in our college who are adopting active learning and team-based approaches. What we measure impacts what we optimize. And counting how many friends our students make means that we will try to optimize the social atmosphere of our classes. However, we have a whole set of goals and our institutional governing body likely doesn’t care about this. We are a state school, and they want to know about retention and graduation rates. As a college we also care about diversity and inclusiveness.

We might be able to increase the friends count if we put students who were like each other all together all the time. But that would inversely impact our diversity and inclusiveness goals. I’m not afraid that the ‘counting friends’ measurement will lead to major perverse side-effects because it is a tertiary measurement. I am hoping that it allows our faculty to be more balanced in pursuing the primary objectives of retention and graduation and remember that our students are also here to become social citizens that engage in our multicultural society.